The literature on animal communication is dominated by intraspecific (i.e. within species) interactions. In this context the receiver and the signaller tend to share the same sensory sensitivities and both parties generally gain a benefit from the interaction i.e. mating success. Often overlooked is the evolution of communication within an antagonistic context. Luring behaviour is a predatory strategy in which a predator entices its prey to come within striking range. The strategy requires a ‘communication’ exchange between the predator and its intended victim. Unlike interspecific communication, one party does not receive a benefit from responding i.e. they are eaten. The animals that use luring behaviour and the strategies they use are diverse. For instance lure range from ‘simple’ existing appendages to specialised luring devices to lures that bear remarkable resemblance to prey favoured by the receiver. Using a range of groovy systems our aim is to contribute to the broader understanding of signalling design in the context of sensory and foraging contexts.

Why do animals adopt different strategies during their lifetime?

Animals over the course of their lifetime may adopt a number of predatory and anti-predatory traits. For some animals the transition between different life stages represents a switch in behavioural and morphological traits. The literature has primarily focussed on the one life history strategy such as adult and juvenile stage but rarely has the ‘realised’ strategies of an animal been considered i.e. the sum of all the strategies used across the lifetime of the animal. We aim to utilise a range of novel systems to determine the selective pressures and ecological constraints that drive animals to  switch tactics at various stages of their life. Using this approach we hope to better understand why animals use different strategies in general. 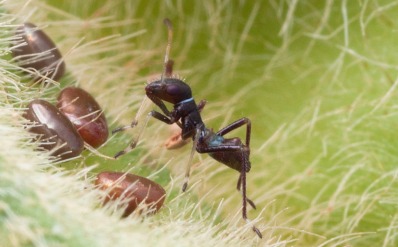 What are the ecological consequences of anti-predatory decisions? What are the various modes by which prey escape predation? How do these strategies work?

Animals use an amazing array of strategies to avoid and escape capture. Our lab has a particular interest in behavioural solutions including escape trajectories, the use of misdirection and the role of protective resemblance such as ant mimicry.

The conflict between sex and death

How do animals manage the conflict between the need to woo a mate and the need to avoid being eaten?

Traits that maximise mating opportunities may be in direct conflict with traits required to avoid being eaten. Such conflicts are thought to prevent runaway selection for big and better sexually selected traits. Our lab is interested in how animals manage this conflict especially in light of the fact most animals have to contend with multiple predators.